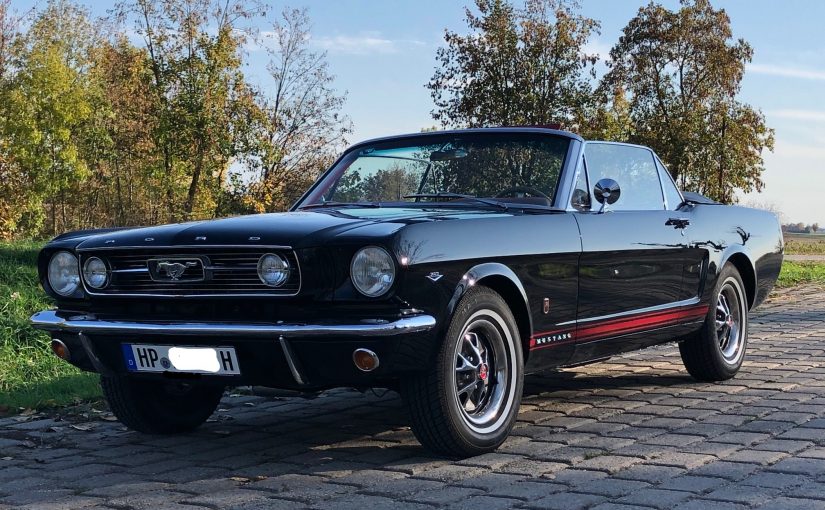 I love to drive. I love driving great cars. The definition of great is being able to experience driving. That can be a car with a lot of power, but it can also be a car that requires some work. That's what today is all about. I already had good experiences with a '92 928 GTS (in times of penalty interest rates also interesting as a drivable investment) and now I was looking around for a classic that should bring me driving pleasure and contribute to the deceleration of life. After a short consideration a Ford Mustang of the 1st generation came on the shortlist. As the founder of the ponycar scene 100% cult and as a convertible in the summer certainly ingenious.

A screwdriver I am not. And I know that buying cheap always means that you have to top up the supposedly saved money later with interest and surcharge (this somehow applies to many situations in life). So I started looking for well preserved oldies and found US Cars 24 Classics in Wuppertal, a company specialized in Mustangs. The homepage is not quite modern, but that doesn't matter - it's the content that counts and it's very good. Because the company's philosophy is to the point: imported old cars are turned into real classics with top marks by a lot of diligence, knowledge and craftsmanship. I took a look at a few of the available stock cars that I liked in the pictures and made an appointment on the spot with the managing director, Mr. Thiel. Favorite was a black 66 convertible with red interior. No sooner said than done and off to Wuppertal.

Mr. Thiel and his team breathe gasoline. After a nice preliminary talk in the salon, we looked at the candidates. And - I've never seen anything like it. There's a '66 Mustang standing there looking like it's fresh off the assembly line. Mr. Thiel explained everything to me personally with a lot of attention to detail and then offered to take a look at the factory himself. There you can see how much scrap is cut out of a body and what is then rebuilt in 100s of hours. In the favoured stock car there were already 1.500 hours! And then I was offered some tweaking: better cooling, stainless steel exhaust system, Edelbrock carburetor, full underbody sealant. Sounded all sensible, handshake and deal! I don't have to think twice about something like that.

Then the waiting began, because the stock vehicle was still further processed, final preserved and rebuilt as ordered. The adjustment of the engine is also part of this. In total, another 300 hours went into it. Mr. Thiel has kept me in between always with pictures and video material up to date.

The registration took place in parallel, not so easy in Hesse, but thanks to close dialogue and with the registration service Kroschke (they actually have an oldie specialist) finally also successfully completed. A Classic Data report was also prepared - passed with top marks. Just reading the report is fun.

And then came the transfer drive - unfortunately in the rain. This began directly with a fuel stop, where we learned the John Wayne position - a gush of gasoline almost always comes sloshing out of the tank if you are not careful. With a full tank we went on the highway - 300 km to the south of Hesse. That was exhausting because of the weather conditions and the unfamiliar seats without headrest - I had sore muscles in my shoulders for 2-3 days afterwards. But especially in the face, because I couldn't get out of the grin. The last 30 km we could drive open thanks to sunshine on the mountain road - a true revelation and better than I ever imagined. The Mustang was built in '66 and not designed for top speed. It's low geared and it doesn't go faster than 100. But it doesn't have to. You hear the sound of the 4.7 liter (289 cubic inch) V8 engine, you feel the wind, you feel the road over the steering wheel. A great driving experience, where you forget the time and life decelerates.

Now the 66 "lives" together with the 928 in my barn and just the sight of it makes every day a special day. And even more so when I start the engine, warm it up and hit the track. I've quickly made connections with other US Car fans, so the odd drive with old and new V8s is behind me and ahead of me. There is gasoline talk and ... driving! 400 miles later I can only say: the '66 is worth every cent and: anytime again!

To learn about the history of the Ponies from 1964 to today, this book Ford Mustang - all models from 1964 onwards is a good choice - I always read it. If one has managed the first pages, it is also good to read. If you want to learn more about the technology, which goes beyond the also worth reading owner's manual, you should take a look at the Ford Mustang wrench manual.